Want a ‘mostly’ homemade pizza that is full of flavor?  Wonder what to do with leftover pork that you have from a previous dinner?  Have extra BBQ Sauce you want to find something to make with?  Then this BBQ sauce pizza is the recipe for you.

Now you might be saying, “Erin, this pizza looks burnt.’ And to that, I would say, “HOW DARE YOU! I would never burn anything.’

Which in fact would be me lying to you because amongst my hobbies of reading & photography, you can often find me cussing up a storm in my kitchen because I’ve burned a meal and/or myself. I am just a human standing in front of a stove then getting distracted by the 10 other things.

But for this specific recipe, no it is not burnt. The edges look that way because the BBQ sauce bubbles up as it bakes. Trust me, it is not the abomination it may seem. And if you do it right, yours will look equally dreadful.

What movie pairs well with a semi-homemade pizza recipe and beer?

For this Mitten Movie Night, we are watching The House.  This movie has TWO of my favorite actors, Will Ferrell, and Amy Poehler.  While I’m a bigger fan of Ferrell’s earlier work (Anchorman, etc.) I can NOT watch a movie he is in.  No way, no how.

The beer: Lager of the Lakes from Bell’s Brewing.

A conversation was recently had on Twitter about what beer would you recommend to someone who had never had a craft beer before. I said this beer, Lager of the Lakes from Bell’s. I got a lot of responses that yes, this is the best beer to start out with. It’s light, crisp, refreshing, but its flavor is broad enough to get an idea of how craft beer truly stands out from your run-of-the-mill beer.

Sex is like pizza: If you’re going to use BBQ sauce, you better know what the f!*& you’re doing.”-Oliver Markus Malloy

While I do like to make my own pizza crust sometimes when you have ingredients that are already fixed why not just go all in and grab a roll of pre-made crust from the store?  There is no reason so that is what I did.

This pork and BBQ sauce pizza has-

How to make this recipe

Preheat the oven to 400 degrees.

On a pan, add a sheet of parchment paper. Layout the crust then using a rolling pin roll it out so it reaches each edge.

Top the crust with BBQ Sauce.

For this, I used my very own Best BBQ Sauce which is vinegar/Memphis style.

Top with the cooked pork.

I use whatever I have available. In this recipe, I used leftover country-style ribs and cubed the meat. But you could use shredded pork tenderloin or smoked pork butt.

Next, layer the shredded mozzarella cheese.

Bake in the oven for 22 minutes or until the edges are golden brown and the cheese is melted.

Slice it up into 12 pieces.

Serve with a side of ranch dressing for dipping. And here you are……

From our home in the Bottom Left of the Mitten to yours ~ Enjoy! 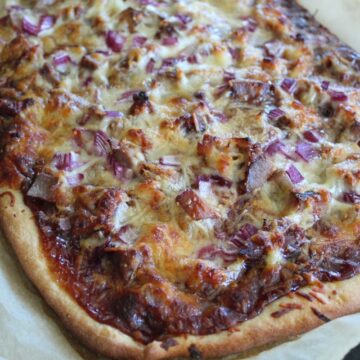 Originally published in November of 2017. Updated post with photos and recipe tweaks in October of 2021.

This site uses Akismet to reduce spam. Learn how your comment data is processed. 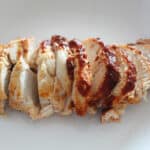 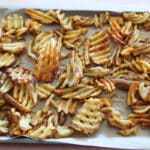 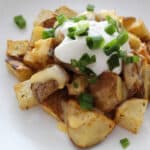 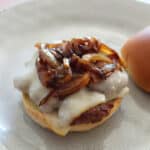